Inner Wisdom vs. the Nutrition Nazis 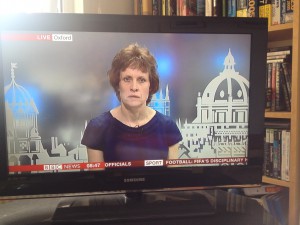 I’ll admit that this is more of a rant than a blog post about hypnosis but sometimes I just get so mad with government experts, it makes me want to give Michael Fabricant a list.

I hate hypocrisy, I really do. I especially hate having to pay for it via my taxes; it really burns. I’ll also go on record as a ‘fussy eater’ i.e. a child that was victimised and bullied by an endless stream of adults who clearly knew what was good for me in terms of what I should be putting in my body. As a matter of principle, it is always wrong to bully people on this point – no exceptions. The stress this induces, I am sure, is responsible for a huge proportion of the neurotic eating disorders we see today coming through the clinic doors. Let me be clear, government advisors posing as health experts are no different than the catholic priests being the moral authority on sex. The more I hear these media reports, the more I’m convinced Nutrition is a pseudo-science. I thought I was the only one until I did a Google search….

The more I hear these media reports, the more I’m convinced Nutrition is a pseudo-science.

Now, the reason for my rant was seeing our Government’s ‘Obesity Advisor’ (note – not health advisor!) Professor Susan Jebb on Breakfast Television calling out parents for the sin of allowing anything fancier than water on the dining table. Bread and water was the message (just with less bread). Heaven forbid they should ever get develop a fondness for turkey twizzlers or have a soda when they wanted one. What a joy her household must be.

Firstly, we are not a nation of obese people. Stand outside any McDonalds and count the obese people vs non-obese people. (If you can’t do this by eye, then clearly, the term obese, as used by government, has lost any connection to reality.) If you get 5% obese in McDonalds I’d be surprised, yet governments blame fast food for a creating a nation where they claim 1 in 4 adults are obese. Now, if fast-food were these islands of corporate greed are creating such a problem, clearly far more than 25% of their adult customers would have to be obese, it’s just simple maths. If they are right, McDonalds should be the epicentre of obesity! Frankly, it’s a lie; it’s what researches tell governments when they want more funding. What really worries me is how, in this information age, people can be so deceived, replacing the evidence of their eyes by media reports from authority figures. As a hypnotist, telling the nation that “we are are a nation of obese people – getting fatter by the day….” is a shocking suggestion. I wish experts would watch their language and stop lying for financial gain and prestige.

Certainly, there are many people that have problems with their weight but the answer is not listening to an external prescription of recycled mantras. This can only lead to a growing separation of mind and body. Listening to one’s internal wisdom and dealing with the cause of emotional eating is the only real way we will ever learn to eat more appropriately. Forcing children to eat anything against their will will only lead to neurotic behaviour. I’m not alone in believing this, a 2002 study found that:

What is most interesting is the internal conflict the forces experienced “experienced strong conflict, 41% moderate conflict and 29% slight conflict. Forty-nine percent said they cried, 55% experienced nausea, and 20% vomited. Most of the responses to the experience were negative with feelings of anger, fear, disgust, confusion and humiliation. The forces also experienced feelings such as lack of control and helplessness.”
– Batcell et al (2002).

Is forcing Jimmy to eat his greens really such a success when the cost can be instilling the above emotions around food? Despite very little evidence for the necessity of a ‘balanced diet’ – the government still says yes – and parents listen. We should be more used to lies from authority figures by now. Let’s not forget, the whole ‘make sure your children drink milk everyday’ had nothing to do with milk being necessary (it certainly isn’t) it was just a way to begin reducing the huge European milk mountain created by political subsidies.

I’m a huge fan of ‘listening to what your body needs ‘following your inner wisdom ’and if that’s ice cream – so be it.

Hominids have evolved over millions of years to be able to live off whatever is in the environment by synthesising almost all the nutrients we need for a healthy life from whatever’s available. In fact with the exception of vitamin C and vitamin D (from sunshine) we are almost entirely self-sufficient as long as we eat something. Don’t believe me? Take an extreme example; for thousands of years Chinese farmers lived to a ripe old age with little more than a paucity of rice each day with an occasional chicken. True, they weren’t giants due to calorie restriction but they were healthy enough. Imagine giving them the dire warning of eating a ‘balance diet’ and ensuring on pain of bowel cancer, they get their ‘five a day’? Imagine an authority figure preaching that to the farmer. Eat our way or die from disease – the science says so! False and certainly likely to induce neurosis. Please explain to me how our government policy is any different from this?

It’s not just food. The government’s war on salt again causes us to embrace tasteless unsatisfying food and ignore our appetite. They’ve demonised salt despite its health benefits. This war on salt is despite meta studies indicating no risk between higher salt intake and cardio vascular disease. Where was the government retraction when this report came out? There was just tumble weed because that would mean they got it wrong yet again and all the millions wasted ‘educating’ people and harassing the food industry into making bland food was all for nothing. But let’s face it, governments are nothing if they have nothing to do – so let’s scare the chickens and create more jobs for the boys. (The good news is also that finally some experts seem to be back-peddling against the ‘eat low-fat foods’ craziness. For a decade the advice has been to reduce the fats, thus making people eat less filling, less tasty, sugar enriched foods, which only leads to spikes in glucose levels. Madness!)

But back to Professor Jebb. If you’re going to put out an expert on TV to tell us about nutrition, wouldn’t you find somebody that looked vital and healthy? Professor Jebb looked pasty and ill – probably enduring being covered up by layers of factor 50 inspired by another government expert; that and a diet of mung beans and water. In this sense only, it appears that she follows here own advice.

This brief clip was just one of the many over the years trying to feed our nation another toxic version of philosophic Asceticism. Essentially their advice is no different than wearing a religious cilice, the war against authentic sex, and that old favourite ‘medicine and food must taste bad for it to be good for you’. Clockwork Orange has got nothing on Professor Jebb. Some academic fields are really messed-up. They pretend correlation is causation and have no respect for context or rigorous scientific method. Nonetheless, they then write a scary report which finishes with ‘these findings are conclusive, yet more work needs to be done’ – in order to ensure they get the next round of finance. And how did dietary advice get to be a proper function of government? That’s insane!

Obesity is a problem for some but Professor Jebb is stuck in effect not cause.

We are the only thinking animal. The only animal that can really be programmed to act against our self-interest and inherent wisdom. There are no anorexics aardvarks or bulimic beavers. It takes people of Professor Jebb’s expertise to create this stress-based neurosis by launching an attack against our endogenous signals for appetite and hunger.

For most overweight people (and anorexics) it’s this inner signal we want to encourage as the guiding wisdom – not the obliteration of it altogether. Obesity is a problem for some but Professor Jebb is stuck in effect not cause. As a hypnotist my job is to find out why my client suddenly put on 10 stone when they hit 15 years of age. Once the ‘why’ of their obesity is resolved – the ‘how’ flows naturally. Significant over-eating is an indication of addiction – an emotional disorder. But as any decent addiction specialist will tell you, the object of the addiction (food) is not the problem, it’s the addict’s attempt at a solution to their problem.

Let’s be honest here, when an obese person goes to a nutritionist – they prescribe a food diet, a psychiatrist prescribes SSNRI’s, a surgeon makes holes in their chest and cuts out 90% of their stomach. Experts fight for control of the waterfront. As a hypnotist, I’m doing the same. But before the leaches make a comeback, can’t we at least admit chronic over-eating (comfort eating) is an emotional problem not a dietary one or surgical issue? People don’t eat themselves to death because they don’t know about wholemeal bread.

But before the leaches make a comeback, can’t we at least admit chronic over-eating (comfort eating) is an emotional problem not a dietary one or surgical issue?

Beware of experts – they want your soul – and if you understand what I mean about listening to that inner wisdom, you’ll see that I mean that quite literally.

p.s. I received several critical posts against my comments of Professor Jebb (some may be by her paid colleagues) pointing out her rigour and integrity would always trump my personal remarks against her. So without wanting to create a new twitter storm (5 tweets against me is a personal best) I’ll just say nothing apart from pointing out another report which lists Professor Jebb having previously having worked for CocaCola and the slimming industry. So I could end this post on explaining what integrity means but some people are just too far gone. As Judge Judy often says, ‘Byrd, you’ve always got to follow the money’.